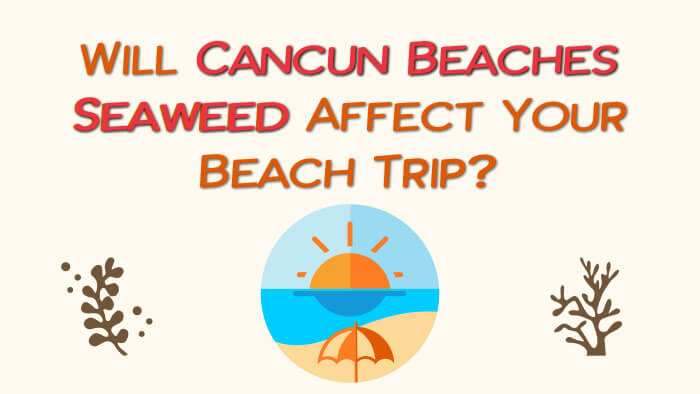 This map displays current seaweed conditions in the State of Quintana Roo on the date at the top left. More about this map below.

I know that you didn’t come here to become a seaweed expert, that you’re here to find out if seaweed will affect your trip to Mexico. A little understanding of the seaweed will give you a better idea about your trip. Then, I describe when and where you can go in Cancun to hopefully minimize seaweed.

My First Experience With the Seaweed

The first time experienced sargassum seaweed was during a trip to Port Aransas, TX, for Memorial Day weekend of 2009. There was tons of seaweed. We vacationed in Port Aransas many times throughout the years and had never seen anything like it.

As far as we could see up and down the Texas coastline, there were mounds of Sargassum. The tide washed large amounts of the brown seaweed onto the beach. There were seaweed accumulations over a foot high and eight feet wide along the water’s edge. That experience was before the boom of the past decade.

It wasn’t only along the entire beach. There was a large amount of seaweed in the water washing ashore. We love playing in the water at the beach, so this put a huge damper on our beach vacation.

The locals said the seaweed came from a body of water called the Sargasso Sea and covered all the beaches of the Gulf of Mexico, not just Port Aransas.

What Areas are Affected by Sargassum Seaweed?

In addition to the Gulf of Mexico (from Texas to Florida), the seaweed affects the entire Caribbean Sea, thus many of our favorite Caribbean beaches, including:

The seaweed also finds its way to the Yucatan Peninsula, so numerous beaches of Mexico are affected, including:

It also affects United States beaches along the gulf coast.

What is Sargassum Seaweed?

Sargassum Seaweed is a type of algae that floats freely in the open sea of the Atlantic Ocean in an area called the Sargasso Sea. The Sargasso Sea is the world’s only sea without a land boundary. 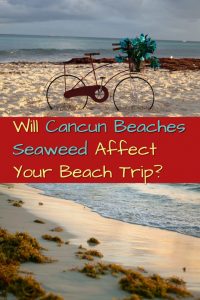 This type of seaweed is free-floating, meaning it’s not connected to the ocean floor, meaning that it’s algae and not seagrass. It provides a home to lots of sea life, providing shelter to baby sea turtles. Ten life forms only live among this seaweed and in no other location on the planet.

It’s an essential part of the ecosystem until tons of Sargassum seaweed invades coral reefs and beaches and smothers other marine life.

Floating seaweed in the Atlantic’s open ocean is a natural phenomenon. Christopher Columbus wrote about the mats of seaweed back in 1492. In 2019 NASA satellite imagery revealed a huge mass of Sargassum seaweed, called The Great Atlantic Sargassum Belt, extending from the Gulf of Mexico to West Africa.

Some attribute climate change and other causes to the algae’s proliferation.

Nutrients from human nitrogen waste flow into the Gulf of Mexico via the Mississippi River. Additionally, rising water temperature increases the flow of nutrients from deep waters off West Africa. Furthermore, the seaweed receives nutrients from Saharan dust clouds.

This abundance of nutrients has helped the seaweed thrive in recent years, and ocean currents carry large quantities of seaweed to Mexico’s Caribbean coast.

I see different opinions on this. Most say that it is not dangerous. Our concern when we saw it was that it might have jellyfish or something tangled in it. It is full of the sea creatures that live in or get caught in it.

Many say that it smells like rotten eggs. The smell results from the algae releasing hydrogen sulfide as it decomposes. To me, it smelled like a fishing boat because of all the sea creatures in it. I will say that the seagulls enjoyed a feast!

What is Being Done About Cancun Beaches Seaweed?

In addition to the impact on the local environment, seaweed is a considerable burden on the tourist industry.

The Mexican Navy deployed ships in the Mexican Caribbean to help with cleanup and containment at sea. On land, local authorities, beach clubs, and tourism industry members along the Mexican coast work together to clean up the beaches. The Mexican government is having more ships built to collect sargassum algae.

When Can I Avoid the Seaweed?

In general, the seaweed season begins in the spring, so it starts drifting in around March, just in time for spring break. The Sargassum season lasts through the summer and fall, so October through February will be pretty clean.

Like everything else in nature, it’s difficult to predict what the seaweed will do. You can see current conditions on this site set up by the University of South Florida. Check out the Satellite-based Sargassum Watch System (SaWS).

The map above is from the Sargasso Monitoring Network of Quintana Roo Facebook page. They are a non-government network that posts frequent maps of the current seaweed status. I’m reiterating that neither is trying to predict seaweed levels but reporting current conditions.

A Reuters article suggests that the intense hurricane season of 2010 may have resulted in an additional sargassum belt. I’ve seen reports suggesting a fierce hurricane season can boost Sargassum growth, but that could also be because both algae and hurricanes benefit from warmer waters.

Where Can I Go and See Less Seaweed?

Are there places where you can increase your chances of experiencing clear blue water and white sandy beaches on the coasts of Cancun? Different beaches get different amounts at varying dimes of the year, and it was rare not to have a little seaweed even on beaches in Spain.

Resorts in the northern hotel zone in Cancun are somewhat protected from the seaweed. Cleaner properties include resorts such as the Hyatt Ziva Cancun. Unfortunately, resorts own these beaches, so they’re not public beaches.

There also tends to be less to no seaweed on the north coast or the west side of Cozumel. Likewise, the west coast of Isla Mujeres and Playa Norte on the northwest tip tend to have less seaweed. These are likely because trade winds off the Atlantic blow from east to west into the Caribbean, so the islands protect their western beaches from Sargassum.

Question: Tell me about your experience with Sargassum seaweed.

Click to book your vacation or get a free quote!!