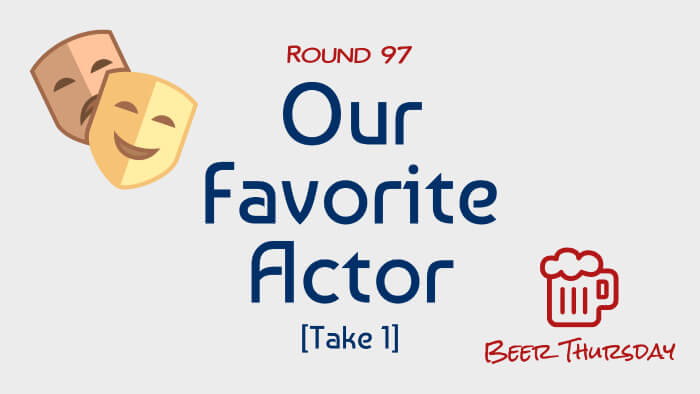 Prepare to be amazed by our insight and dramatic amazement-making as your heroes make their first attempt at revealing their favorite actor.

Also Our Favorite (This Time)

Question: Who is your favorite actor?

If you enjoy the show, please help some brothers out. We would appreciate your supporting the Beer Thursday crew on Patreon.

Jay: Shayne, why are you whispering? Yeah, that’s great. You’re a great actor your

Shayne: Thank you. I love acting,

Shayne: but I play one on TV.

Jay: today’s round, we’re going to discuss our favorite.

Jay: Yes. Thank you. I just had it stuffed, but

Shayne: Leslie Nielsen. No doubt. Who is our favorite actor?

Shayne: at the top. Naming your top five from A to B and go

Jay: I was thinking, Oh,

yeah, that’s right. Yeah. So I was, I just basically came up with my, my favorite actor of all time, but I have a few honorable mentions and I also,

Wait a minute. I think I’m bad with math, wait, I was born in.

Jay: Cause you know it’s

Jay: okay. So, Would you like to, to start or shall I just, just throw it out there? I want to mention my honorable mentions first and then, then I’ll get to my favorite actor and why?


Jay: But I think with Robert de Niro, I mean, he. Definitely one of the best actors who’s made some of the best movies ever, but I also kind of think he basically plays a version, same character in every movie

Shayne: Yeah. With the exception of maybe Stardust, he’s always the kind of tough guy

Shayne: Stick with it.

Jay: and, but he’s, he’s really good at what he does. And he’s definitely one of my, he’s definitely on my list of one of my favorite actors of all time. And the other honorable mention that I will mention honorably is, Yeah, it’s us Sir Tom Hanks, who I believe is a American.

Jay: yeah. Yeah. So, so sir, Tom Hanks, I think he. Easily. He’s my, one of my favorite actors. He’s my other honorable mention. I mean, he was so great in Forrest Gump, Philadelphia story, blues and buddies.

Shayne: Not much I can do about that.

Jay: and he is currently in the process. I don’t know. Pretty done filming it, but there’s a, a movie about Elvis coming out, which Tom Hanks is playing Colonel Tom Parker, which some, and he’s a, an unknown, as far as I know,

Jay: see what I did

Shayne: I could see that happening in a world, like with blue and green.

Jay: So I mentioned my honorable mentions. I’m not, I haven’t gotten to my favorite actor yet, but I would love to know some of yours. Honorables Minton’s.

Shayne: going to, I never try to go just with good, simple answers. I always try to reach and find something. It always seems like there’s someone that I’m not thinking of. So I tried to not think about it just to make sure that if I did think of somebody, it would have been somebody that I didn’t not think of.

So for my honorable mention, I’m going to say Chris Pine.

Jay: what? He is a great actor.

Shayne: And, and it doesn’t all plays different roles. I mean, a great captain Kirk, probably my second favorite captain Kirk,

Shayne: that. Did you see into the woods?

Jay: one of the first times I ever saw him was in the, I believe it was the princess diaries diaries

Shayne: And then, and then another one of my underrated movie, I love the movie, “Come Hell or High Water,” him and Jeff Bridges, who would also be close to being an honorable mentioned Jeff Bridges, but they were both great in that movie. And he just, he has pretty good range, I think.

Jay: he has another great one.

Shayne: And then, for my other honorable mention someone who seems to me like an up and comer, but I get to say been out, they’ve been acting for a while a while.

Shayne: Yeah, just from the, his role in “The Office,” which is a little more comedic, a little more dry and off the cuff to an awesome hi Heindel in the Marvel cinematic universe. And then I, I can not see anyone else playing Roland Deschain. I know there’s a Gunslinger series that’s going to come out and someone else is probably going to play Roland.

But to me, Idris Elba Elba is Roland Deschain.

Shayne: Out of time.

Jay: Sorry, folks. We’re going to stop down to do a toast real quick.


Jay: put a pin in that, on the address Elba thing. But first we got to do a toast and Shane I’ve I’ve poured myself another glass of this,

a bourbon of some sort. I’m not going to mention its name because I can’t pronounce it. And, and you also are drinking a

bourbon, some sort, which you can pronounce whiskey so,

Jay: Speaking of, speaking of Thor and Marvel

Jay: sort of the, kind of relates to that, my toast that I’m about to do today in America, on our podcasts today. And here’s to our toast I mean, wait a minute. I can’t, I can’t, I mean, it could, but I think it just did, but, so I toast.

Jay: I haven’t either. I’m looking forward to

Shayne: up to the,

Jay: I’m going to hopefully going to be watching that tomorrow night.

Shayne: so Jay, would you do with the honor of mentioning your favorite actor?

Jay: Oh, yes. Yeah. But I just want to come back to that pin that I put in Idris Elba, and I hope it doesn’t hurt him, that I

Shayne: He can take it. He is tough.

Jay: But, he’s, he’s come up several times and, and, I know we had talked about, his name had been thrown around for the next James Bond

Jay: yeah, I, oh man. I would campaign on his behalf because I think he would be the perfect choice.

I mean, I guess he would be a little older, I don’t know

Jay: You can do it. So my favorite actor of all time, is an older one. And, but. An oldie, but a goodie. And I think everything I’ve ever seen him in has been great, but of course my favorite movie and the one that probably everybody would know him from would be it’s a wonderful life.

He was, he played the, the what’s the one that was, with the rabbit. Oh,

Shayne: I think everyone thinks they can do a Jimmy Stewart impersonation,

Jay: Yeah. That damn road is what is,

Shayne: not Fred Quinn, but,

What’s his name from a pet cemetery.

You had all week.

Jay: I love Dick Van Dyke. Oh yes. I agree. Or is a lot of his friends or his, he tells people, that some people refer to him as, Richard Von Lesbian, but either way he is.

Shayne: And, and don’t worry, I’m not going to take anything you’ve said in the past 20 seconds and reuse it. That’s some tag to say particular at the end of the show, unless what is a Patreon subscriber then making.

Jay: I think that’s a great idea, but oh my gosh, I

Shayne: want to hear Jay say that, then it’s going to cost you 10 bucks on our Patrion

Shayne: or maybe you don’t have to pay for,

Shayne: He is a Universal of the Galaxy Goodness.

Jay: is just such a, he just seems so happy and just, I hope I’m that way. When I’m God, how old is he? He’s in his mid to late nineties, right?

Shayne: Yeah. Very up there in his old beings.

Shayne: It was good to say The Rock. And then for some reason, when you said Jimmy Stewart, Dick Van Dyke and I love his work.

Shayne: No, in fact, let’s do a second toast. You’re ready. We’ll get

Shayne: Oh, this is the only time that we’ll ever do two toasts on Beer Thursday

Shayne: and you know what, and then we’re going to close with the toast. We’re not even going to give the outro we’re not going to beg people, beg people to please, please donate on Patreon.

We’re just going to close out with this toast.