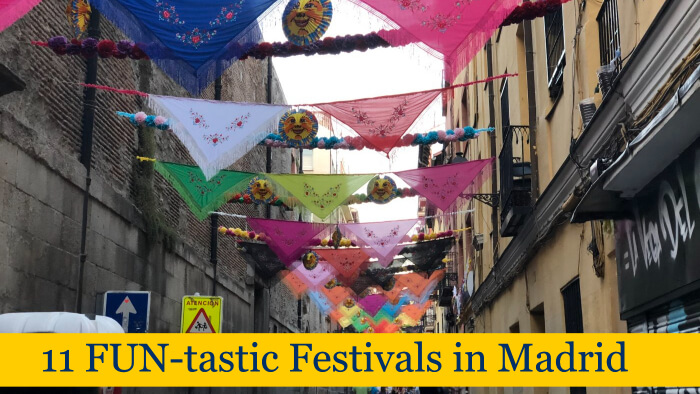 Want to visit Madrid and experience some of the many fantastic festivals? I’m here to help. This post highlights everything you’ll want to know about the festivals in Madrid.

I’ll begin with helpful information about all the fiestas in general. If you prefer, you can jump straight to the festivals.

Since the many festivals in Madrid are annual events, Madrid has had lots of practice. Madrid dominates the festival game.

You’re going to recognize a common theme among the Spanish festivals. I’ve been to a few summer Madrid festivals, researched some others, and noticed the same theme.

Street Parties at the Festivals in Madrid

Neighborhoods block off streets and host street parties. The bars and pubs set up pop-up bars along the road, gaming tents, and huge grills grilling mounds of food. You’ll find a dance party on every corner. I mean that literally, and I only use the word literally literally.

It seems like all the writers use the phrase traditional costume, but I don’t think the Madrilenos consider it a costume. It seems to me they love getting dressed up in the traditional attire, gathering in the streets, and dancing.

I joke about the first time I saw a street party that, “I turned the corner and a concert had broken out.” Many of the districts will have stages to host open-air concerts for the festivals. Live music is a huge part of festivals in Madrid.

The Fantastic Food at the Festivals in Madrid

There is so much traditional food, grilled freshly on the streets. It’s fun to watch the grill masters at work. The food smells delicious, looks delightful, and tastes incredible.

I recommend timing your visit to Madrid around a unique festival. Although the temperatures in August are hot, I recommend trying to attend one of the August fiestas.

The Best Festivals in Madrid

Enjoy the whole list or jump to the festival that interests you most. The most popular are the August Verbenas.

The song The Twelve Days of Christmas is a nod to Epiphany, also known as Three Kings Day or Dia de Los Reyes.

Three Kings day falls on January 6, the twelfth day after Christmas. My wife, who is Spanish, says it’s bad luck to leave Christmas decorations out past Epiphany, and each year ensures our decorations are put away well before January 6.[1]

I don’t even get a partridge in a pear tree.

The holiday gets its name because it commemorates the events of Matthew 2:2-11 when the three wise men brought gifts to the newborn Jesus. Thus, until recently, Spaniards exchanged gifts on Epiphany rather than on Christmas Day.

Epiphany is one of the most important festivals in Spain. Madrileños celebrate this day with a Three Kings parade, and everyone eats a Roscón de Reyes, aka a King Cake. Now we know where that tradition originated!

Going to Madrid? Grab this FREE copy of the Ultimate Carry-on Packing List to make sure you carry everything you need on your flight!

Madrid’s Carnival celebration coincides with one of the most festival famous festivals globally, Carnival in Rio. They both run from the Friday before Ash Wednesday through Ash Wednesday, so they coincide with Mardi Gras celebrations in other parts of the world and my back porch.

Madrid Carnival is more of an all-ages celebration. It’s celebrated with Parades in separate districts, making and wearing costumes, bonfires, and parties.

A fascinating tradition is the Traditional Burial of the Sardine (Entierro de la Sardina). It celebrates the end of winter and beginning of spring as also “.symbolizes the end of negative thoughts and corrupt actions.”[2]

Dos de Mayo is a Spanish public holiday that commemorates the popular revolt against Napoleon’s Troops in Madrid on May 2, 1808.

Thus, it is one of the most important festivals in Madrid. The people of Madrid rose up against the French Imperial forces that occupied the Spanish capital. That day was early in Spain’s war of independence from France.

Walking around Madrid, it was difficult to fathom that battles occurred on some of the same ground I stood on. Puerta del Sol was a primary battleground of this revolt. That’s one of the fascinating aspects of visiting this wonderful city.

How is Dos de Mayo celebrated? The individual districts, as well as surrounding pueblos, host street parties and have community meals.

Also, at the beginning of May is Labor Day on May 1. Since many businesses and schools close both days, many Madrileños enjoy the time off as part of their celebration.

During Franco’s regime from 1936 to 1975, celebrating Labor Day was prohibited. Because of that prohibition, Labor Day and Dos de Mayo hold a deeper meaning for Spaniards.

Madrid’s biggest fiesta, La fiesta de san isidro, celebrates the patron saint of madrid, San Isidro. Although May 15 is the national holiday for the city’s patron saint, there is a week’s worth of festivities.

La Fiesta de Dan Isidro begins on the Friday before May 15 and lasts through the Sunday after. On that Sunday, Madrilenos prepare the city’s most traditional dish, Cocido Madrileño.[3]

My in-laws live near San Isidro Park in Madrid, where there are huge parties. They have a tradition of getting some Cocido at the party. But nobody’s cocido compares to Abuela’s cocido. Don’t tell my wife I said that.

Something I’ve learned about cocido. It’s very healthy (at first). It’s essentially a bone broth. We typically make it in the fall and make extra broth to freeze and drink during the winter.

San Isidro day also marks the beginning of bullfighting season. Bullfights aren’t my thing. If you want to see one, you’ll want to buy tickets early, because they sell quickly.

For updated info on performances, check out the Fiesta San Isidro website.

Be sure to download this FREE copy of the Ultimate Carry-on Packing List to make sure you dn’t forget to pack anything for your flight!

Festimad is a long-running 2-day alternative music festival held from the end of May to early June. Music lovers come from parts of Spain all to enjoy this first of the summer festivals in Madrid.

La Semana del Orgullo is Madrid Pride Week, the annual LGBTQ pride festival hosted in the community of Chueca and el centro, the city center. The festival in Madrid starts at the end of June, on the International Day of Pride (August 28th), and lasts until the parade on the first Saturday in July.

Although we missed the parade, my brother-in-law and I went to Chueca for the festival celebration after the parade in 2018.

Like all of the annual events in Madrid, it was a huge party. It was amazing how crowded the streets were with people celebrating all way from Chueca down to Puerta del Sol and over to Cibeles Plaza. It is no doubt the largest LGBTQ  party in Europe.

Featuring indie, pop, and rock music, Mad Cool is a huge music festival in Madrid and is one of Europe’s biggest festivals. Mad Cool takes place on fairgrounds near Barajas Airport on the northeast side of Madrid. The headliners have been huge groups. In 2017, Foo Fighters and Green Day were headliners.

Mad Cool Music Festival 2021, the festival’s 5th year, is scheduled for July 7 – 10 and will feature The Killers, Cardi B, and lots more.

The live performances include pretty much all performing arts. [4]:

There aren’t currently updates for 2021, but you can find information on their website.
If you book your Madrid vacation with me, I will help you with translations.

Because of these amazing August festivals, the month of August is an amazing time to visit Madrid. These are considered the most traditional festivals in Madrid.[5] :

Even though many shops are closed for August because many Spaniards take their vacation in August, most establishments are open. These three festivals provide two full weeks of celebration and make August a magical and fun time to visit Madrid.

Although the August days in Madrid are pretty hot, with average daily temperatures hovering in the high 90s, Madrid rests at 2,188 feet above sea level. That makes for some spectacularly gorgeous nights for enjoying these festivals.

If you adapt the Spanish custom of taking a siesta during the hottest part of the day, you’ll have plenty of energy to enjoy these fiestas late into your Madrid August nights.

The best districts to enjoy the August Verbenas are:

Now that I think about it, those are the best districts for just about anything.

Like many of the festivals in Madrid, the celebrations of San Cayetano occur throughout the city. I’d recommend visiting all three districts. I’ve attended festivals in Lavapies and La Latina.

In 2010, I did an interview on TeleMadrid about the festival in Lavapies. I saved the link, but TeleMadrid purged videos a long time ago. It was about 45 seconds of me showing how little Spanish I could speak at the time. I was on TV, though!

The Festival of San Cayetano involves much of the same fun as the other festivals in Madrid:

One of my favorite things about these festivals is the street decorations. Even during the day, walking the streets, that festive feeling flows through you.

The festival includes some religious ceremonies, especially at the San Cayetano Church. We visited this church one night during the festival. The priest told me (as my brother-in-law translated) the story of the church and festival.

Funny side story: As we were leaving the church, I noticed my brother-in-law was wearing his AC/DC Highway to Hell shirt with little demons all over it. The priest was completely unphased by it or our obviously having had several beers. I love Madrid!

The Festival of San Cayetano also includes a few processions and runs from August 2 – August 8.

The Festival of An Lorenzo runs from August 9 to August 11. Spaniards celebrate this festival much like they do the other August verbenas. This verbena includes a special mass and a procession to honor Saint Lorenzo at the San Lorenzo Church in the Lavapies district.

While looking up information on the festivals in Madrid, I noticed a couple of sites say that San Lorenzo is the patron saint of Madrid. As I mentioned above, San Isidro the Famer is the city’s patron saint.

Saint Lawrence (Lorenzo) was a Spanish saint killed in a fire during the Roman persecution of the Catholic Church. There are also festivals honoring him in early August in various other countries, including Chile and Italy.

La Paloma is the last of the August verbenas, running August 12 – 15. It is celebrated mainly around the La Latina district around the Virgen de la Paloma Church. It’s one of the biggest and most popular festivals. Like the other festivals in Madrid, it includes:

This festival honors Virgen de La Paloma (Virgin of the Dove). It includes a parade up Calle de Toledo from the Toledo arch to La Latina. Lots of music, eating, drinking and partying, street dancing. Everyone was wearing traditional Madrileno attire.

I enjoyed an entertaining aspect of this festival that I did not find in any articles!

We attended this festival in 2014. We gathered at the Puerta de Toledo (the Toledo Arch). Festival revelers packed the street from the river to the arch and most of the side streets along the way.

The local fire department released hundreds of doves from the arch to begin the parade that proceeded up Calle Toledo to the La Latina district. That is one of my favorite walks in Madrid, so enjoying the parade along that route was a magical experience.

Other Festivals in Madrid

Bookmark this page and check back for updates. I wanted to get the above information out soon, so I went ahead and published it. I will update you with more details on the remaining festivals soon.

Click to book your vacation or get a free quote!!