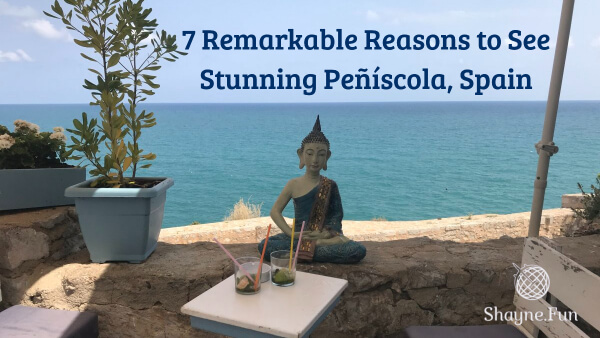 Are you looking for a vacation destination with abundant fascinating sites, activities, and culture? Here are 7 reasons why you should visit Peniscola, Spain!

If you’re planning a trip to Spain, I highly recommend adding Peñíscola to your Must-See List. It will be a delightful surprise for your traveling party, and you’ll be The Vacation Superhero!

How do You Pronounce, “Peniscola Spain?”

It looks like Pensacola, as in Florida. It’s not, though. First of all, the n is an ñ. That ñ pronounced like the recording artist, Enya. That is followed by an accented “i,” which makes the name a little challenging to pronounce.

Isn’t that part of the fun of being a traveler and an adventurer, visiting places with hard-to-pronounce names?

It’s fun to say! Try it! When people see my Peñíscola hat–yes, I have one–they say, “Oh, you love Pensacola?” Then we get to have a great conversation about Peñíscola, Spain. (Although, I did enjoy Pensacola, too.) The accented “i” after the ñ make it fun to say. It is a gorgeous, fascinating city that few have ever heard of.

Why You Should Peñíscola, Spain

The Peñíscola Castle is Incredible

Approaching the ancient walled city of Peñíscola, Spain. About 140 miles from Barcelona on the Balearic coast, it’s the kind of place postcards were invented for.

It’s an impressive sight. Simply driving to the city would be worth the trip, but more delights await if you make your way to the top of the castle.

The Views in Peñíscola, Spain are Breathtaking

The views from the castle out onto the Balaeric are amazing. The water is the blue you dream of from destinations in Greece and the Caribbean.

You can see the boardwalk and beach to the north and the fantastic Serra d’Irta Natural Park to the south.

Peniscola, Spain can get pretty hot in the summer. During the hottest part of the year, the high temperature averages around 84°F (29°C)*. I believe it was hotter than that while we were there.

The steep inclines and narrow roads offer you plenty of shade, though. You’ll find nice breezes around some of the corners and through many of the windows.

The average lowest temperature of the year (in December) is 57°F (14°C)*. That is pretty nice for winter at a seaside pueblo!