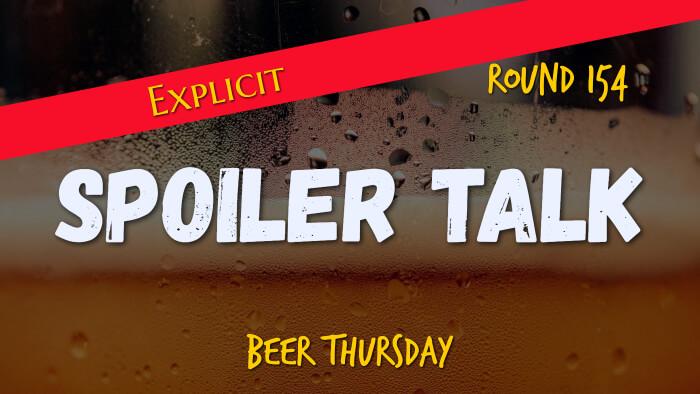 Spoiler Alert: Today on a very special round of Beer Thursday, those mighty manufacturers of monkey business are joined by full-time complainer and part-time astronaut, Tim, the enchanter. With little help from Tim, our champions of chat and charcuterie will tackle the subject of spoilers!

Question: What is the Statue of Limitations on Spoilers?

If you enjoy the show, please help some brothers out. We would appreciate your supporting the Beer Thursday crew on Patreon.

[The show is transcribed with artificial intelligence. It’s not accurate, but a lot of it sure is funny!]

Shayne: a minute. Wait a minute.

Shayne: what is this movie even about?

Shayne: with Leonard? Is that Leonard that’s Leonard Nemo, right.

Tim: in search of yes. Yes.

Jay: Literal need. Okay. Okay. Next thing you’re gonna tell me is Clark. Ken is Superman. If you tell me that we’re done,

Shayne: you know what, Jay, wait until the ending and find out.

Shayne: Tim, do you know any verses from the book of Lamentations?

Tim: And the people did and antelope cereal, Jay, didn’t get it.

Shayne: good. I love the money by the references.

Shayne: who should go first? Should we get Tim’s boring, but good.

Shayne: Tim will have a nice, well thought out. Factual opinion,

Jay: I think basically basically what we’re discussing here, uh, before we start off, uh, uh, each having our opinion is how soon is too soon to, to, to, um, mention something that happens in a movie that may or may not spoil it for somebody who has not seen that movie.

Tim: Three weeks. Okay. Next round.

Shayne: three weeks. How long has love and thunder been?

Shayne: Okay. As of today when we’re recording on Bastille day, I, I also think it depends on the context. If you are publishing something kinda like what we are doing at this, a podcast, a show, I think that maybe a week, maybe two is enough. As long as you’re prefacing by saying this is gonna have spoilers in it. If it’s just your friends or your friends at work or something like that, then however long it takes, if they don’t see it for a month, then you know,

Shayne: chances are someone else is gonna spoil it for them.

But go ahead and be that good person. And, and don’t spoil it for your friends.

Tim: I honestly think you guys don’t have anything to worry about. There’s only three people that listen to this ridiculous.

Jay: spoiler you’re one of.

Shayne: yeah. So, so wait, if Tim’s on, if we have Brian and Tim on the show, that means that Kiki’s the only one listening.

Jay: Well, we need to have all three of them and then, then nobody will be listening.

Shayne: we should do that. We should do it for our 200th episode or Christmas. Whichever comes first.

Jay: There we go. So I would like to voice my opinion on spoilers and here’s what I’m gonna say. I agree with Shayne, if somebody has not seen a movie, a TV show, whatever that could ruin it for them or give them too much information about that. Particular thing, then it should be as long as it takes, if they haven’t seen it and they don’t want to know, then you stop right there.

And for God’s sake, don’t say, okay, I won’t tell you anything. That’s gonna ruin it for you. But I do want to tell you this one thing. because if you’re some there’s no need, when they say I haven’t seen it, don’t tell me about it. That’s where it should stop. And, and, uh, if you’re like me, unfortunately I have this, I have this terrible gift of being able to figure out a movie based upon a very small. Spoiler. I can tell you, you tell me anything you give, tell me anything about the movie. I’m gonna figure out the entire movie. It’s a curse. And, um, I don’t know what, I,

Shayne: on any type of social media, you have to, you have to just avoid everything. You have to avoid Twitter, Facebook, even Google YouTube, because there will be some idiot out there that doesn’t preface it or they get all giggly because , I spoiled it for everybody.

Shayne: mean, you shouldn’t even say that there is a surprise, whether or not there’s a surprise ending or whether or

not there’s a cameo.

Shayne: Don’t say anything say liked it didn’t like it. Like, I didn’t even tell, I have a friend at work who hasn’t seen Thor love and thunder yet. And I, I haven’t even said, I thought the beginning was a little rush. All I’ve said was you should see it when you see it. We’ll talk about it.

Jay: Yeah. I think you say it best when

Shayne: Who bringing it back to the Bangals angles.

Jay: you say nothing at all. uh, Keith Whitley actually.

Tim: See then there’s people like me that don’t care about you or your feelings. And I have seen it. And I wanna talk about it and I’m just gonna talk anyways. Hey, guess what? Everybody’s got streaming services. Everybody can go to the movies is dead.

Jay: The, the, at least the killer strain of it is for, for the time being,

Shayne: now. It’s just a getting out of work strain.

Shayne: oh, I think you have COVID. Oh, stay home, then stay home.

Jay: I, I think you disappeared.

Shayne: toast for the splitter

Jay: Tim’s gonna express his opinion on spoilers, which I think he already did, but he’s going to expound upon that. Something about being selfish and not caring about anybody else, but anyway, Shayne, do you have an appropriate toast for this spoiler talk,

Shayne: What was the question?

Shayne: This is a quote by the person who said this. When I read about the evils of drinking, I gave up reading.

Jay: Where’s that from? That was a good one.

Shayne: Seal level. Um, my dad sent a bunch of them in an email, so I had access. Here’s a tell me. Okay. Before we get to, before we get to the end, the big finale, as it were, tell me what you think about this spoiler alert. This goes back to maybe last year before first season or second season of the Mandalore.

It probably didn’t even know who Yoda was.

Jay: Here’s the deal. It’s like, don’t, don’t talk about anything to do with it whatsoever. But if you do something like that, revealing the name of the baby Yoda, which we all know is not really baby Yoda, that seems very minor and not spoilerish

Jay: the character in his name has something to do.

Tim: hang on and well, hang on a second. Was he, or this person informed what the baby. Yo’s name was

Jay: and hear it from himself. Okay.

Shayne: so Tim, did you crawl into the beer? Can or

Shayne: Yeah. I don’t know. You know what, when we’re famous, we’re gonna buy some

be less important to someone else?

Jay: I also think it’s a good thing to say is like, Hey, do you watch, do you watch better call Saul? Yes. Have you seen the latest episode? No. Okay. Let me know when you’ve seen it. Cause I wanna talk about it.

Tim: I think it’s ridiculous that we have to waste time rounds. Yes. I, to

Shayne: thank you for cussing by the way.

Tim: throw ass out there.

Jay: you know what, Tim. What um, Tim, you just brought up a good point, which was a, uh, you had an idea for a round to discuss and, um, the fact that people would even have. To bring up this sort of topic, or we would have to bring up this topic on when it, when is okay to spoil something.

When somebody says, like you say, I haven’t seen it, don’t tell me about it. It should end there, but we live in a world now that’s full of dumb people. I mean,

Jay: The word love and thunder

Shayne: or maybe it was last week’s round.

You don’t know so

Jay: I do know this. I think, uh, I think I started the engine it’s time for someone to, uh, press the metal to the GLE Ketle

Shayne: I’m pretty sure Jay is referring to the little engine that could, and I think that like that engine, you can, subscribe to Beer Thursday so that you get every single round every single morning, when Thursday says, hello, you get the round. In your ears magically, you, you can go to our Patreon page and donate as little as $5 a month, as much as $50 a month or more.

It’ll help us keep being in your ears every Thursday. And then I should though I should, because at, at the $13 level, we will give you a hello. every Thursday.

Jay: Hey man, come on Tim. We’re trying not to have to work for a living here.

Jay: we can’t all be self contained millionaires. Like you

Tim: that would make my life so much easier.

Jay: I have your

Shayne: Also the next round of.