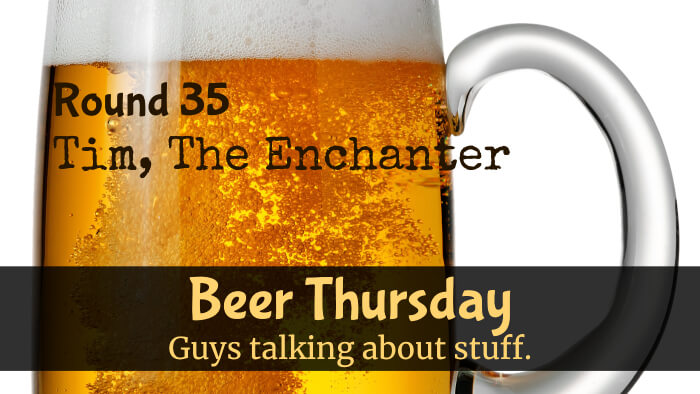 Today our fearless heroes tackle their greatest fear: a not-so-hateful hater who loves them. Listen in as he rips them to shreds, then admits his affection.

What movie is that a reference to?

Enjoy the voicemail we enjoyed. Then, relish our reaction to the accusations! Then…

What do you think?

“Here’s to the brilliant, warm, and handsome company that you keep.”

If you enjoy the show and can help some brothers out, we would appreciate your supporting the Beer Thursday crew on Patreon.

Jay: I didn’t notice you there. Welcome to be Thursday. We are your host, Jay, and Shayne. Can you guess which one’s which? Don’t worry. We’ll tell you later.

So, Shayne, I like to play a little bit of an audio from a voicemail that one of our franemies, he’s a friend, he’s a fan friend enemy, but not really an enemy. He’s a, he’s a, he’s just a friend or a fan, but I don’t think he’s really a fan. Cause he, I think he’s a, I don’t know. We’ll let, we’ll let our listeners decide because I felt. I felt he had a few problems with our, with our, on the Marvel, universe when we were doing our review of Spiderman far from home.

Shayne: That is highly unexpected.

Shayne: That it took so long all. Well, okay, let’s hear it. Should I be nervous?

Shayne: Can I drink? What would listen?

Shayne: Wow. That was, as they say, a “hot sports opinion.”

Jay: Well, I thought so. And I just want to mention one thing right off the bat. It’s Beer Thursday, not Beer Thursdee. I don’t know what a Thursdee is.

Shayne: I think that’s what you get on Thursday that makes you want beer.

Shayne: I can see his confusion.

Jay: Maybe we should start calling it Beer Thursdee.

Shayne: No. Well, you know what. We do need a new logo. So, we’ll just let fate decide fate as in the logo maker. If you know anyone who knows anyone who does that sort of thing. So what do you think about this? Our first audio critique, Jay.

Jay: Well, I enjoyed it. immensely. I felt, he had a lot of valid points. I don’t think he made any, but he had, I did, you know, I did kind of take a little, kind of felt bad when he mentioned me needing feminine products, so to speak.

Shayne: That was offensive.

Jay: Yeah. Well, first of all, I don’t need them anymore because I’m going through manopause. So there, Tim, if that his real name. That is his real name.

Shayne: Well, our, our hormones do things too, but I don’t think ours are as tough to live with as…

Shayne: I like the way they ended up falling in love at the end.

Shayne: You know what, for all anybody knows he was.

Shayne: …who I’m pretty sure will eventually be in an Avengers movie. So suckit, Tim.

Jay: Technically she did have a superpower. She, she, she became a grown-up version of herself.

Shayne: She probably had the Time Stone back then.

Jay: She probably had the Time Stone. We don’t know for sure, but that’s my guess.

Jay: Well, I agree with you. So I guess that would rank that as my 3rd favorite Marvel movie.

Shayne: I think me too. I’m saying that.

Jay: Boy, Tim, you really set us straight, didn’t ya?

Shayne: After listening to his tone and then some of the ways he phrased some of those things. I’m, I’m wondering if maybe we need to look into getting a Refraining Order against him.

Jay: Wait, a Refraining Order? Did you say…

Shayne: Yes. A refraining order, you know how you know, like in a song, right. There’s the refrain and you repeat the refrain and it’s like the hook, like the chorus, because it’s the good part of the song. And so I think we should get an order where that it requires Tim to repeat this over and over again, a Refraining Order.

Shayne: That’s what I think

Jay: I don’t know if you keep coming up with ideas like that. I’m going to put out a Refraining Order.

Jay: Yeah. Okay. Refraining Order. I really thought it was restraining order, but whatever.

Shayne: I’ve heard it both ways.

Jay: I’m sure you have. So, do you have any, any, other misgivings about the message we got from our friend?

Jay: That is true. We do. Somehow we get, we get distracted a lot.

Shayne: But the only problem I have with that is that we also did the same thing with Daredevil 2. And he mentioned nothing of that.

Jay: Well, I, I don’t recall us reviewing Daredevil 2, or…

Shayne: Not Daredevil. What’s the other one’s name? Deadpool 2. Damn it, damn me and my not things getting straight.

Jay: Yeah, that first Deadpool was, was great. And so it was the second one.

Shayne: And his other point about drinking whiskey on Beer Thursday.

Shayne: I think it’s time for a toast.

Jay: I think you’re absolutely right. And by the way, that’s why we drink whiskey. It’s for the toast.

Jay: How rude. So what do you, what are you drinking?

Shayne: I have reverted back to my old favorite, which isn’t that old, the local Firestone & Robison, Texas whiskey that I’m going to drink out of this little terracotta cup.

Jay: I am drinking what little bit left of mine fake one of my favorite whiskeys,

Shayne: You was done did about to finish that!

Jay: Well, hopefully I won’t because I really, really don’t want to be hungover tomorrow, so.

Shayne: Don’t finish it all now, maybe over the next few rounds.

Jay: Right, exactly. So do you want to do the toast or shall I?

Shayne: You go ahead and shall you do the toast if you would like to be shalling?

Jay: Alright, well then “here’s to the brilliant, warm and handsome company that you keep.” Salud. What was that sound?

Shayne: That was  fake drinking. I might leave it in. Cause you know, whenever we have a drink, whenever we toast, there’s always dead air. So I thought maybe if there’s like a gurgle critical sound, that would, it would be, you know, like a, like an action sequence in a movie.

Jay: Yeah. But to answer your question, we drink beer throughout the entire, not your question, but actually it wasn’t a question. It was more of a statement

Shayne: It was an accusation

Jay: It was an accusation. I think that’s what it was. Yes because it’s beer Thursday because we drank beer, but we also, we added the toast in the middle and you know, you can toast with beer, but real men toast with whiskey

Jay: Or perhaps a strawberry daiquiri. It’s your choice.

Shayne: Or, a Kiwi daiquiri.

Jay: Sure, glass of milk chocolate, but preferred. So…

Shayne: Any other thoughts on, Tim, The Enchanter?

Shayne: I thought he had a good point about Bruce Willis…bruce Banner’s ego, because he couldn’t control what the Hulk does, so he doesn’t really embrace his whole superhero-ness.

Shayne: But maybe that was just because of how in love he was with Jennifer Garner. Nobody knows.

Jay: That’s a very good point. And they practically grew up together, you know? So, you know, we were so young when they met,

Jay: Yeah, I think, I think you’re right, but to sum up, we really appreciate the fact that you called and left that message kind listener tells us that you were listening to us. And we really do appreciate that because.

Shayne: Now, are you saying that we’re going to play recordings of everyone who leaves us an entertaining message on our phones?

Shayne: Let’s not give them that bar.

Jay: That’s a pretty high bar in my…

Shayne: That’s not. You don’t have to outdo Tim, but you do have to make it interesting.

Jay: I love, I love the fact that after that angry voicemail he left, he ended with “I love you.”

Shayne: I think it’s healthy. I mean, you get it all out there. You vent. And then, you get back to what’s real, which is his love for you.

Jay: Yeah, I mean, it just shows that we can disagree. We can, we can get angry, but in the end, it’s all about love.

Shayne: Yes. And you know that he said it out of the heat of the moment he was angry and that he didn’t mean all those horrible, offensive, demeaning–Did I mentioned offensive?–things to you.  That we will play again. If he calls again.

Jay: Now that now that you put it that way, Tim, I forgive you.

Shayne: That’s that’s really all I’ve got on it. That’s…

Jay: Well, we’re going to have another topic today. Are we just gonna,

Shayne: You know what let’s just, that’s enough for this week.

Jay: I’m good for that. Hey, some people will say “they phoned it in,” but we didn’t. Somebody else phoned it in.

Shayne: And we recorded it.

Jay: And we recorded it.

Shayne: And I would just like to say, “Phone it in again, keep phoning it in and we’ll, we’ll enjoy the topics.”

Shayne: You may not get your whole episode like Tim did, but that’s just because we loved Tim.

Jay: It’s true. So, Shayne, how do people subscribe? What can people do to make it go better?

Shayne: It’s so easy. It’s right there on the phone. Right? Wherever the podcast is, you just tap the title. It’s scrolling across the screen if you’re listening to it now, and then it’ll go to the show and you just click the subscribe button.

Jay: And then you say we have a pantalonees page?

And you have the opportunity to help us out. And then maybe get a little something extra for your troubles

Jay: They could help us out for as little as $5 a month.

Shayne: As little as…

Shayne: “A Starbucks,” And also share it out to your friends. And we love you. And we’ll see you in the next exciting…

Shayne: hopefully less offensive round of…