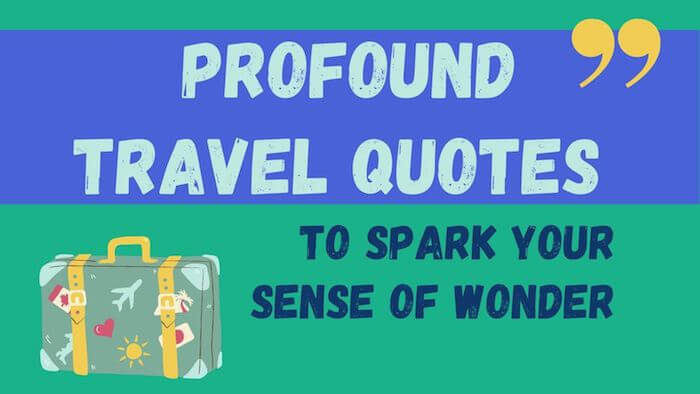 Want to savor your sense of adventure and share your love of travel with friends? These travel quotes will inspire you to begin writing your travel stories.

“There’s only four ways to get unraveled.
One is to sleep and the other is travel…”
-Jim Morrison, The Soft Parade

“The world is a book, and those who do not travel read only one page.”
– Saint Augustine

“One’s destination is never a place, but a new way of seeing things.”
– Henry Miller 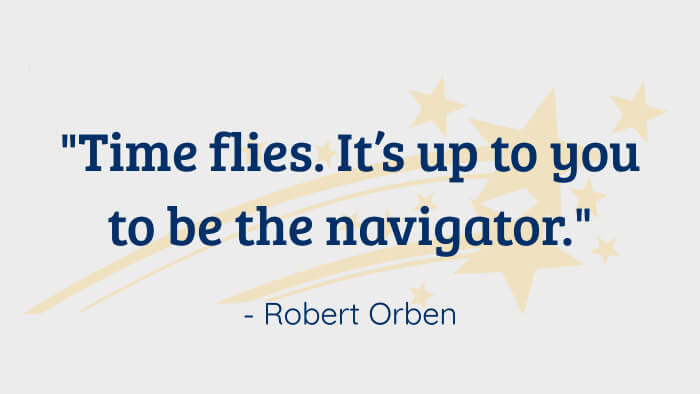 “Time flies. It’s up to you to be the navigator.”
– Robert Orben

“Only those who will risk going too far can possibly find out how far one can go.”
– T. S. Eliot

“We wander for distraction, but we travel for fulfillment.”
– Hilaire Belloc 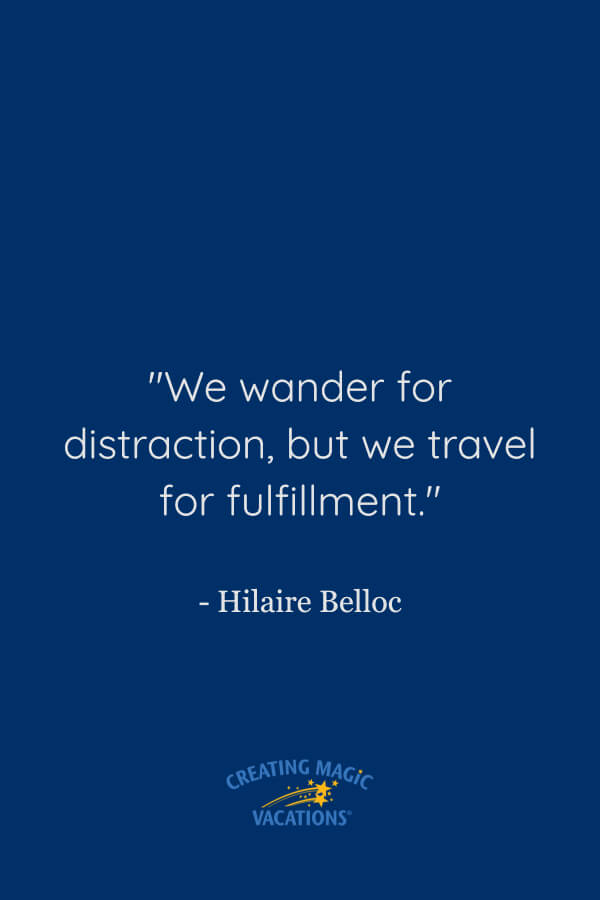 “If you think adventure is dangerous, try routine; it is lethal.”
-Paulo Coelho 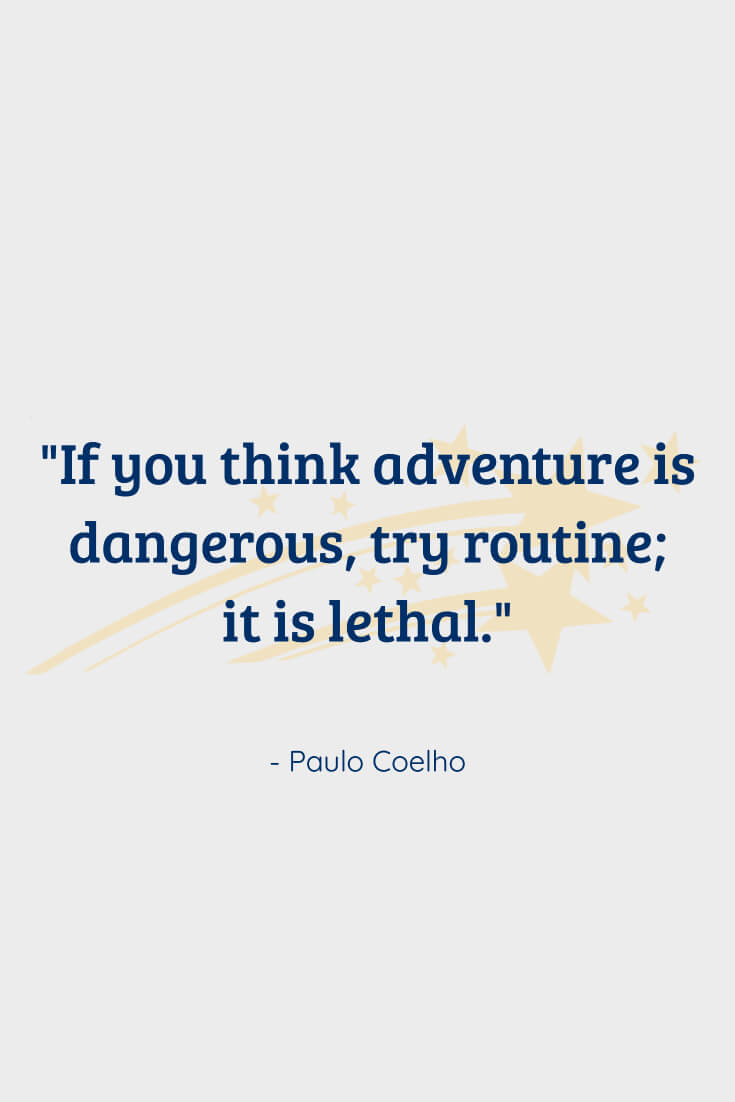 “Of the gladdest moments in human life, methinks, is the departure upon a distant journey into unknown lands. Shaking off with one mighty effort the fetters of Habit, the leaden weight of Routine, the cloak of many Cares and the slavery of Civilization, man feels once more happy.”

“Why do you go away? So that you can come back. So that you can see the place you came from with new eyes and extra colors. And the people there see you differently, too. Coming back to where you started is not the same as never leaving.”
– Terry Pratchett

“To travel is to live.”
– Hans Christian Andersen

“Broad, wholesome, charitable views of men and things cannot be acquired by vegetating in one little corner of the earth all of one’s lifetime.”
– Mark Twain

“Our battered suitcases were piled on the sidewalk again; we had longer ways to go. But no matter, the road is life.”
– Jack Kerouac

“I’m in love with cities I’ve never been to and people I’ve never met.”
– John Green

“Surely, of all the wonders of the world, the horizon is the greatest.”
– Freya Stark

“Don’t get so busy making a living that you forget to make a life.”
– Dolly Parton

“Traveling – it leaves you speechless, then turns you into a storyteller.”
– Ibn Battuta

“Travel expands the mind and fills the gap.”
– Sheda Savage

“Wherever you go becomes a part of you somehow.”
– Anita Desai

“I haven’t been everywhere, but it’s on my list.”
– Susan Sontag

“I am not the same, having seen the moon shine on the other side of the world.”
– Mary Anne Radmacher

“Travel and change of place impart new vigor to the mind.”
– Seneca

“I was learning about languages and cultures I never would have experienced in school. The physicality of actually being in these places deepened my understanding of the world as a community, which is much smaller than most imagine.”
– Dave Grohl, The Storyteller; Tales of Life and Music

“To really see America, you need to drive it mile by mile. Because you not only begin to grasp the immensity of this beautiful country, you see the climate and geography change with every state line. These are indeed things that cannot be learned from an old school book under the cold classroom lights. They must be seen, heard, and felt in person to be truly appreciated.”
– Dave Grohl, The Storyteller; Tales of Life and Music

“And now, Harry, let us step into the night and pursue that flighty temptress, adventure.”
– Albus Dumbledore

“A mind that is stretched by a new experience can never go back to its old dimensions.”

“Wherever you go, go with all your heart.”
– Confucius

“Travel is about the gorgeous feeling of teetering in the unknown.”
– Gaby Basora

“For my part, I travel not to go anywhere but to go. I travel for travel’s sake. The great affair is to move.”
– Robert Louis Stevenson

“Travel is more than the seeing of sights; it is a change that goes on, deep and permanent, in the ideas of living.”
– Miriam Beard

“Perhaps travel cannot prevent bigotry, but by demonstrating that all peoples cry, laugh, eat, worry, and die, it can introduce the idea that if we try and understand each other, we may even become friends.”
– Maya Angelou

“We live in a wonderful world that is full of beauty, charm and adventure. There is no end to the adventures we can have if only we seek them with our eyes open.”
– Jawaharlal Nehru

“All journeys have secret destinations of which the traveler is unaware.”
– Martin Buber 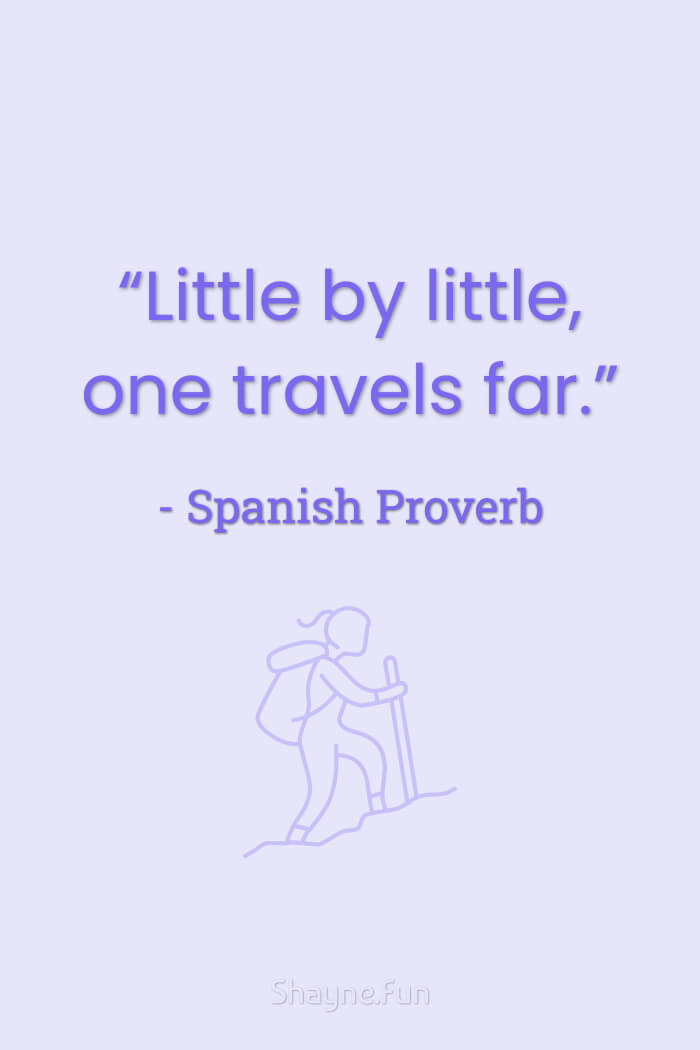 “Twenty years from now you will be more disappointed by the things you didn’t do than by the ones you did do. So throw off the bowlines, sail away from the safe harbor. Catch the trade winds in your sails. Explore. Dream. Discover.”
– Mark Twain

“Your true traveler finds boredom rather agreeable than painful. It is the symbol of his liberty — his excessive freedom. He accepts his boredom, when it comes, not merely philosophically, but almost with pleasure.”
– Aldous Huxley

“It’s better to see something once than hear about it a thousand times.”

“The train is a small world moving through a larger world.”
– Elisha Cooper

“You have to go there to know there.”
– Zora Neale Hurston

“Man cannot discover new oceans unless he has the courage to lose sight of the shore.”
– Andre Gide

“We travel, some of us forever, to seek other places, other lives, other souls.”
– Anais Nin 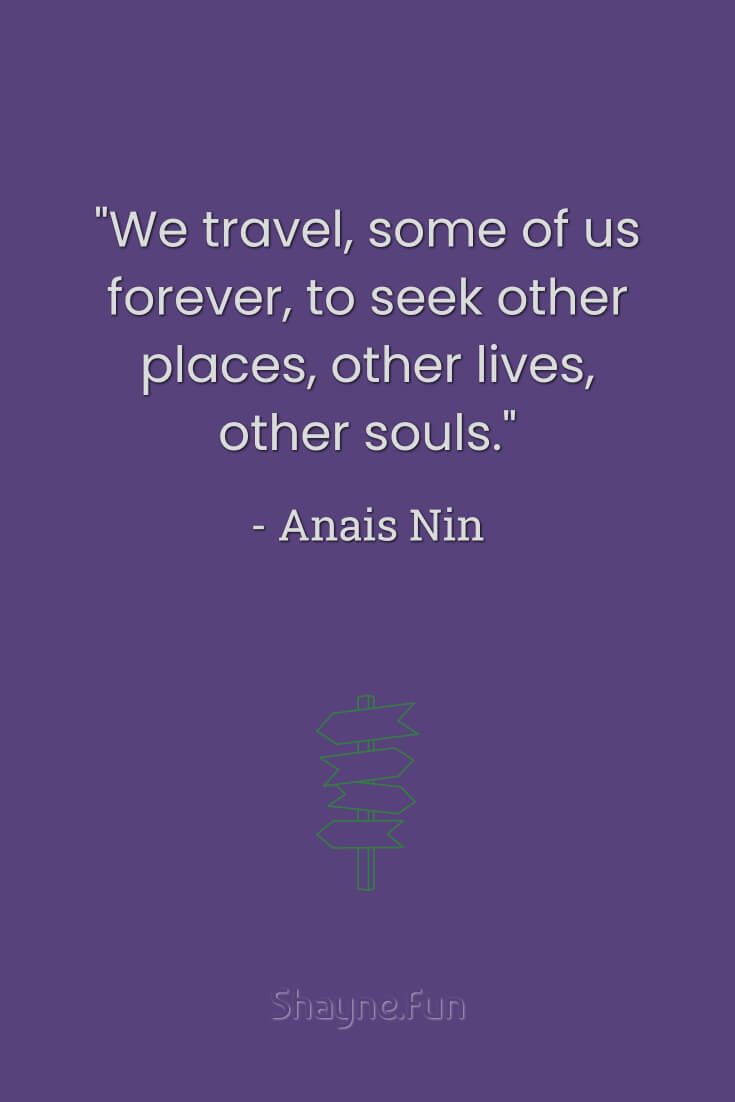 “A journey is best measured in friends, rather than miles.”
– Tim Cahill

“Stuff your eyes with wonder, live as if youʼd drop dead in ten seconds. See the world. Itʼs more fantastic than any dream made or paid for in factories.”
– Ray Bradbury

“Wandering re-establishes the original harmony which once existed between man and the universe.”
– Anatole France

“Every woman that finally figured out her worth, has picked up her suitcases of pride and boarded a flight to freedom, which landed in the valley of change.”
– Shannon L. Alder

“Once you have traveled, the voyage never ends, but is played out over and over again in the quietest chambers. The mind can never break off from the journey.”
– Pat Conroy

“A man can lose himself, in a country like this
Rewrite the story
Recapture the glory.”
– Neil Peart, Seven Cities of Gold

“Sunrise on the road behind,
Sunset on the road ahead,
There’s nothing to stop you now!”
– Neil Peart, Ghost Rider 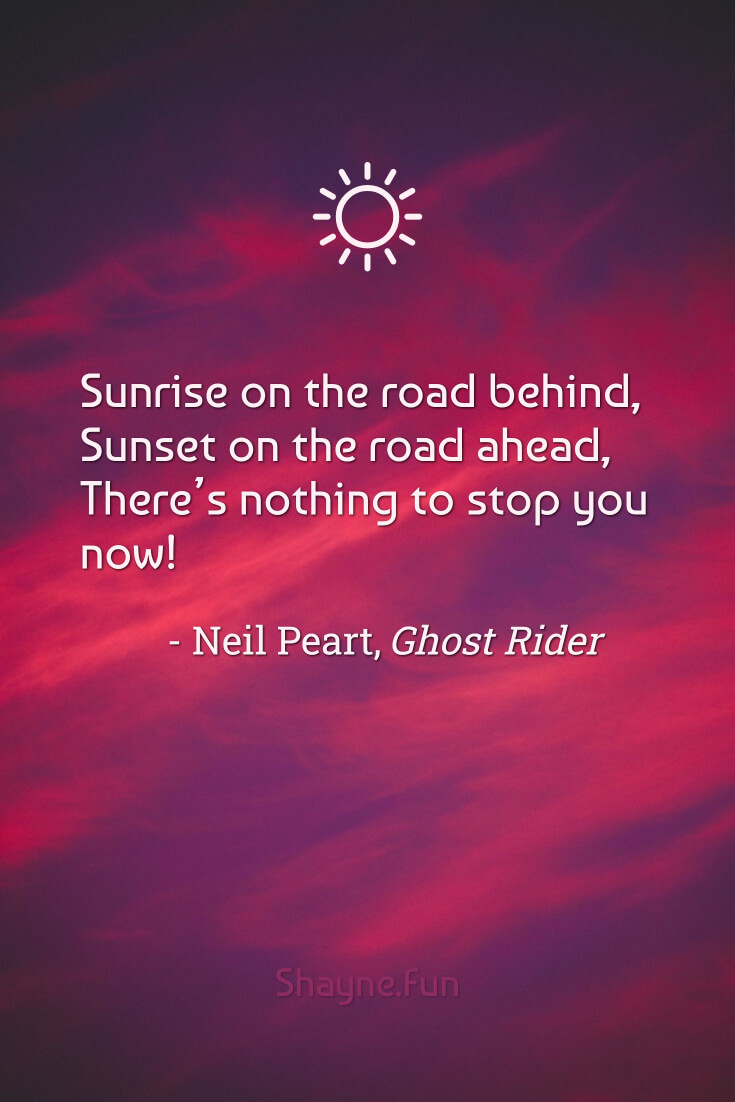 “From the point of ignition
To the final drive
The point of the journey
Is not to arrive
Anything can happen.”
– Neil Peart, Prime Mover

“We are young
Wandering the face of the Earth
Wondering what our dreams might be worth
Learning that we’re only immortal for a limited time.”
– Neil Peart, Dreamline 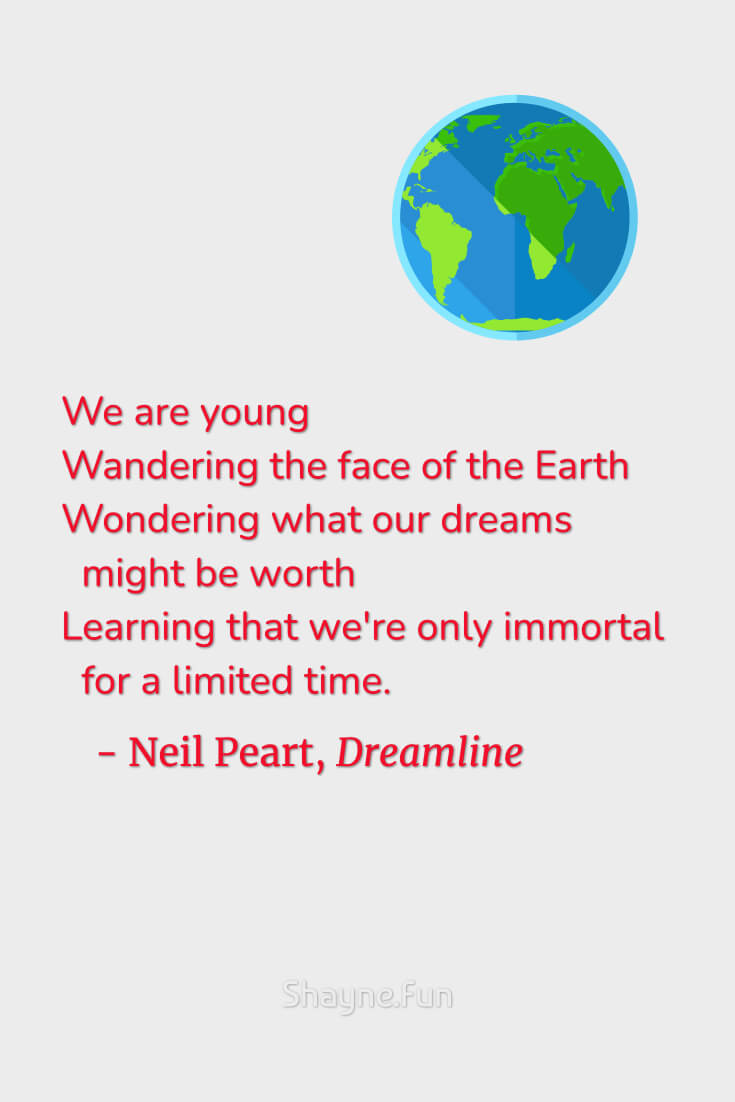 “The road, the weather, other traffic, the background of inspiring scenery, and the occasional glimpses of birds and animals. Landscapes, highways, and wildlife: my new Holy Trinity.”
– Neil Peart, Ghost Rider: Travels on the Healing Road

“Start a new chapter, find what I’m after
It’s changing every day
The change of a season’s enough of a reason
To want to get away”
– Neil Peart, Fly By Night 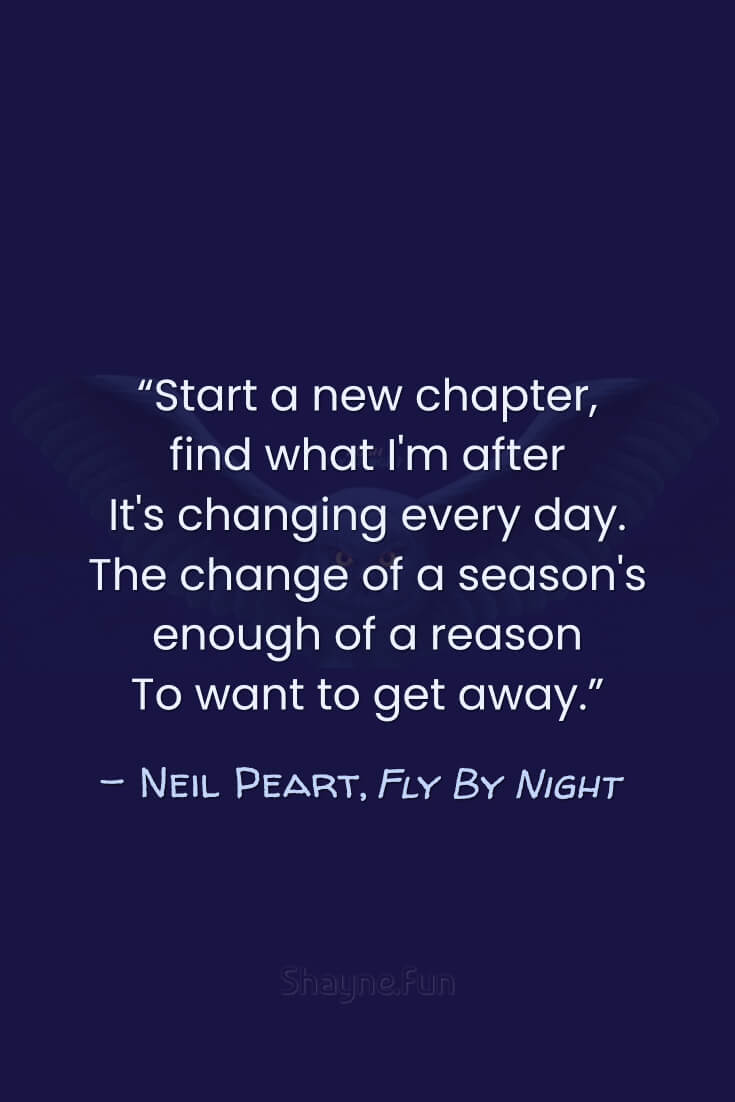 “We travel in the dark of the new moon
A starry highway traced on the map of the sky
Like lovers and heroes, lonely as eagle’s cry
We’re only at home when we’re on the fly
On the fly”
– Neil Peart, Dreamline

Hunter S. Thompson Quotes Living Your Life to the Fullest

“Buy the ticket, take the ride…and if it occasionally gets a little heavier than what you had in mind, well…maybe chalk it off to forced conscious expansion: Tune in, freak out, get beaten.”
– Hunter S. Thompson

“Anything that gets your blood racing is probably worth doing.”
– Hunter S. Thompson

“Some may never live, but the crazy never die.”
– Hunter S. Thompson

“Freedom is something that dies unless it’s used.”
– Hunter S. Thompson

“I understand that fear is my friend, but not always. Never turn your back on fear. It should always be in front of you, like a thing that might have to be killed. My father taught me that, along with a few other things that have kept my life interesting.”
– Hunter S. Thompson

“One of the great woes of modern life is the lack of the unexpected, the lack of adventure.”
-Théophile Gautier (French poet and novelist)

(On the road, it’s always better to be lost. When we get lost, projects become surprises and that’s when, but only then, that the journey begins.)
– Nicolas Bouvier (Swiss traveller and photographer)

“Life is either a daring adventure or nothing.”
– Helen Keller

“To my mind, the greatest reward and luxury of travel is to be able to experience everyday things as if for the first time, to be in a position in which almost nothing is so familiar it is taken for granted.”
– Bill Bryson

“Do not follow where the path may lead. Go instead where there is no path and leave a trail”
– Ralph Waldo Emerson

“Two roads diverged in a wood and I — I took the one less traveled by.”
– Robert Frost

“I soon realized that no journey carries one far unless, as it extends into the world around us, it goes an equal distance into the world within.”
– Lillian Smith

Many of the links in this post contain affiliate links. If you make purchases via those links, I will receive a small commission. 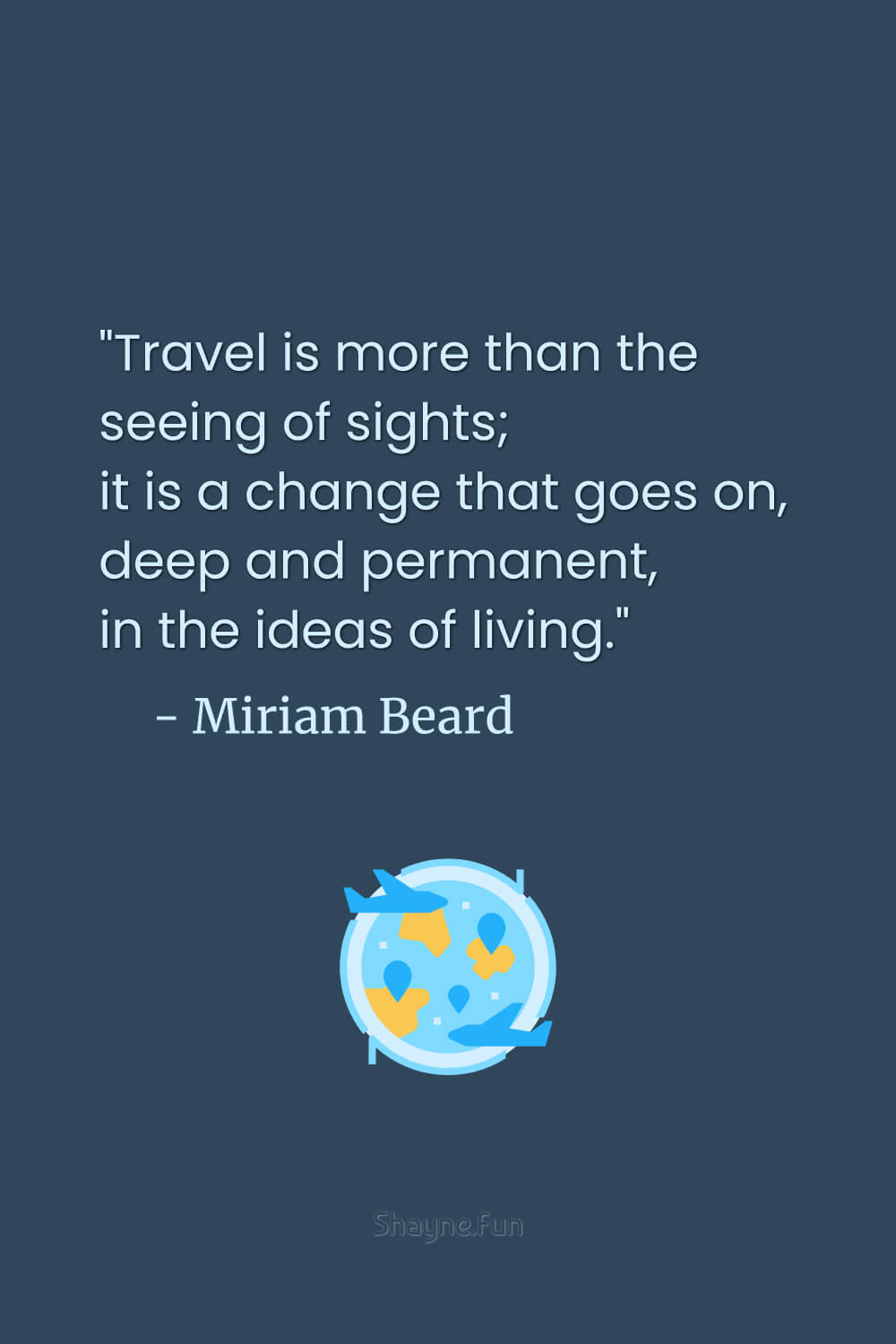